Some time ago, in early June, I broke my camera.  The local market doesn’t sell cameras yet, and I don’t have the skill to repair it, so I’ve learned to live without it.  But I find now, setting up a blog, some visual content would be useful.  I’ll update this post over time whenever I source interesting photo.  I’m unlikely to credit it, but you can fairly safely assume that none of the photos herein are my own work.

Where’s Mingkaman?  Well if you searched for “Mingkaman” on Google you probably already know that it’s in Awerial County, South Sudan, about 120km from Juba and 35km from Bor, next to the White Nile.  At this point on the Nile’s course, during the rainy season it’s more of a broad, shallow lake that extends in patches across half the country.  Until early 2014 Mingkaman had a population of about 7,000 people, mostly Dinkas.  They’re now host to around 90,000 internally displaced people (IDPs), a selection of humanitarians from NGOs and UN agencies, and a few enterprising Ethiopian market vendors. 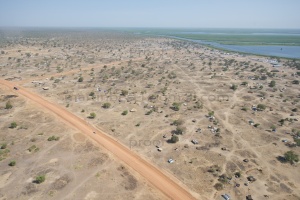 To get to Mingkaman by Landcruiser from Juba means a couple of days on the road; by truck maybe a week.  Bor is accessible by boat, which are usually full of cows.  White Nile crocodiles grow up to 4m – there’s a skin in a hut near the port that testifies to this, but local tradition says that the head of a dead snake or crocodile should be thrown away “or more will come”.  Even with the head safely disposed of, a slow moving boat full of cows isn’t usually accepted as a safe form of transport so I travel to and from Juba by helicopter, provided by UNHAS and operated by Ukranian helicopters.  Mingkaman airport is a murram (like gravelly clay) helipad in a clearing in the bush outside town.  While waiting for the flight it’s normal to watch a cast of cows, goats, groups of men on a motorbike or groups of women carrying baskets walk across the helipad.  Usually a couple of cowboys will turn up with spears to watch the landing.

I live at Mingkaman Humanitarian Hub.  It’s a common living compound for agencies without their own spaces in the area.  Most of the really big organisations – ICRC, WFP, MSF, Oxfam, or Save the Children – have their own compounds, but there are some major NGOs and UN agencies living and working in the Hub.  We get purified water from Oxfam – pumped from the Nile and treated with chlorine, then stored in a five cubic metre tank which lasts about 36 hours, there’s a generator providing electricity 12 hours a day and light until 10pm; then the perimeter is lit with solar lights.  We have lightning fast internet provided by the Emergency Telecommunications Cluster.  It’s actually faster than I was used to living in London, although somewhat less reliable.

The team here has gone through a few changes over the last six months, and I hope I’ll be able to get hold of some more photos.  I’m the one on the left.  I’ll be blogging about life in Mingkaman and South Sudan, planning my wedding in September 2015 (back in England) and anything else that takes my fancy. 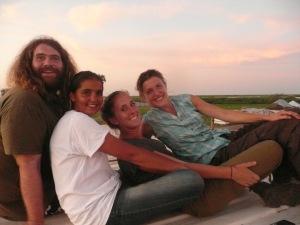 Here’s the Awerial team sitting on a 20ft container at the Mingkaman Humanitarian Hub, 28th May 2014.